I think it's a common fear, the worry of doing too much/too little/the wrong thing/etc.  Throw in a dose of anxiety, first-time horse-owner, and atypical endurance breed?  Some weeks are a lot worse than others. 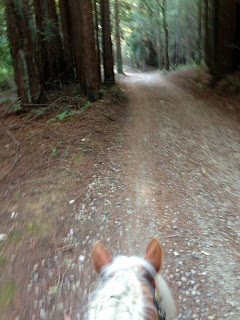 Saturday we headed to Wilder.  I was quite pleased with her for the first half of the ride.  Forwards, rateable, generally willing and polite.  Frankly even til Twin Gates she was good through the gravel.  Then?  Tension under my leg, a reluctance to trot down hills (from the mare that DELIGHTS in trotting down hills, much to my usual dismay), forwards when I pushed a bit and then she'd just plain quit.

I hopped off, walked, and spent the next mile thinking that I had broken my horse.

My working theory finally became that she must have to pee.  I knew she had peed around noon when I first showed up at the barn.  At this point, it was past six.  I was reasonably certain she had not peed since then.  Normal horses would just stop and pee, but in the past three years, I think Fetti might have peed with me on her once.  Maybe.  99% of the time, she holds it til we're home.

Whenever we'd stop for a minute, she'd just drop her head to graze.  Pony would reluctantly walk.  Engage her hind end? No thank you.  Trot on? Not interested.  She wasn't lame, wasn't short-striding, was definitely heavy on both fronts but that was about it.  That last four miles probably took us an hour and a half, even once I got back on and kicked her forwards.  There was really nothing I could do other than point her at the trailer and hope she figured this out eventually.

Sure enough, pulled tack, loaded up, and when we arrived at the barn, just a bit of pee in the trailer.  Put her in her stall and she peed a TON immediately.  Sigh.  I'm glad that's all it was, but I have no idea how to deal with it.

I read somewhere that if a horse won't pee on the trail, you just haven't taken them on a long enough ride.  If that's true, I'm in trouble.  That was the most miserable two hours on the trail we've ever had to do.

Total stats: 14.1 miles. 3.4 mph average - not bad when you throw in a broken rein clip, a very reluctant forwards, and a TON of walking.  4 hours, 10 minutes.  Conclusion: we can indeed get to Wilder in 4 hours with those two ponies.

I rode again Sunday, partly because I was so frustrated with the second half of Saturday's ride, partly because I wanted to make sure she really did feel okay.  Took a junior and her borrowed horse and we went to check on a previously-blocked trail.  Trail was not blocked!  Through the river we went.  Neither horse was particularly forwards, but we weren't really inclined to ask for an awful lot, and in fairness it was still reasonably warm.  Fetti was probably a bit tired from Saturday, the junior's horse had probably never done that many hills and miles in one ride, at least not in several years.  9.5 miles, 2.84 mph, walking the vast majority of it.  3h 20min.
Posted by Figure at 6:48 AM