- cleaning out spare tack and clothes, then listing them all for sale (sales post coming soon)


- Mount Diablo photos from last year!  I checked the NATRC page again and happened to see.. a link to the photos that I'd given up on finding from last year.  Woohoo!

One friend commented that she looks like a Santa Cruz hippie in this photo with the braids.  I can totally see it.  I want to get this framed.
I think this must have been at the start of the ride, even before we mounted up, and after she was declared sound to start.  Channeling our inner relaxed Western Pleasure selves... just standing and de-stressing right before we mounted up.

I'm not sure where this was taken, except that it must have been coming into a check since I had my stirrups dropped! Trot-trot-trot.

* I can ride the other Haffies w/t/c whereever with no fear.  I lost a lot of my confidence last year when I came off, though, and working Fetti in the arena still scares me.  Three balanced, non-bolting, non-bucking strides absolutely made my day.

** We're still working on the whole bale bag thing.  Current status: one bale of grass, approx half a bale grass/alfalfa per week.  Great progress over two bales a week.  I do think she's gained some weight.  It'll come off again quick enough this spring/summer, so that's fine.  End goal is to get her to approximately a bale/week again - that's what she was eating prior to the bale bag switch.

*** This is so exciting, y'all.  It's so often said that you should be doing 10-15 miles in 2-3 hours before you try your first LD.  It's been quite literally months since we last did a 5+ mile workout at a 5mph pace, and even then, we'd only get one of those occasionally.

My plan for this ride was to trot everything trottable at whatever speed she wanted.  Jog?  Fine.  Supertrot?  Fine.  But she had to keep trotting and not break to walk after every burst of speed.  We ended up at just a hair under 5mph for the whole ride.  I think this is what we need to work on right now; this is closest to how we go at rides, and it'll help condition her for the sustained trotting even if it's not at great speed. Her walk is pretty terrible, so we'll work with what we've got.

I assume that the more we do this 8-mile loop at a mostly-sustained trot, the easier it will be for her and the less recovery time she'll need between trots and/or the quicker the trots will be.  I'd welcome thoughts from those of you with more experience conditioning (either for eventing or endurance!) - am I totally missing something here?  Does this sound reasonable?
Posted by Figure at 9:45 AM 7 comments:

I went out to the barn Thursday thinking we'd do a brisk 10-mile ride and try to throw some balanced canters in there.

About a mile in, I scratched the entire distance plan and settled for trying to find the pony's brain.  Canter sets don't mesh well with a pony that's behind my leg and looking for things to spook at.

About two miles in, we met a tree. 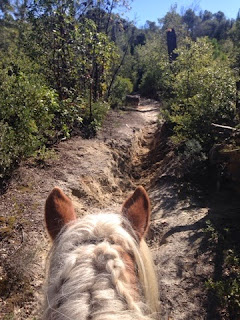 Let me highlight the tree: 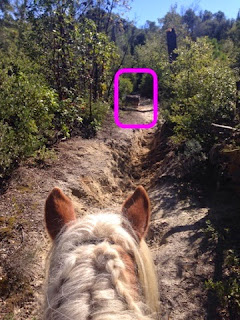 The tree was obviously terrifying. Confetti was reluctant to move forwards. Two steps forward, five back, three steps forward, pause to contemplate.  Naturally this section is effectively a singletrack with the erosion, so hopping off to longe or working in circles was not an option.  Forwards, back, forwards, spin with her front end off the trail, forwards, back all the way to the foot-tall log across the trail, and back over that for good measure.

I wish I could say I won the battle.  Sadly, twenty minutes later a pair of hikers showed up coming towards us. Since they did not get eaten Fetti deemed it allowable to walk nervously past them and the tree.

We briskly made our way up to the top, where we found a car and a bunch of folks with chainsaws.  Fetti decided this was totally fine, and looked hard when they dropped a tree.  That was it.  Crazy stuff with trees? Whatever. Fallen, already cut tree? OMG GOING TO DIE.

I jogged a bunch of the downhills on the way home.


She wasn't convinced she really totally had to come with me, but once I snapped some photos she was willing enough.  Hooray for pony jogging partners.


Once we got home I was completely wiped out - as if we'd just done a LD - but it was only six miles and one battle.  I'm not really sure what to make of that and I'd happily take suggestions.


Since I'm so late in posting this, I actually do have a followup!  We went back this weekend and did battle again, but the battle was relatively minor and I was pleased.  The following day we went with friends and.. the lead horse also objected to the tree.  Thus the pony earned some points back, since it clearly wasn't all in her head.

Hopefully we'll have more interesting things to post on soon!  If the sunshine holds, my riding mojo has returned, and we're back out and at it again.
Posted by Figure at 5:25 PM 2 comments:

I feel awful for saying it, but I am so done with winter.
Even when my winter has sunshine and 70-degree days, I want my long days back!

So.. we've been puttering, and schooling, and puttering some more.

January trail miles come to a grand total of... 33 miles. One ride per weekend.  Yuck.

February goals:
- offside mounting still.
- solo ride at least once
- speed work on the back trails? It's incredibly boring, but gets the job done.
- arena work OR speed work once weekly, ideally both
- rasp feet approx once weekly

I ordered a blanket after the chilly windstorms of December

and we are in the middle of a heat wave now.

The bale bag experiment continues.  Currently they're lasting a full five feedings.  Confetti is still not entirely convinced this is okay, and she ought to get food at every mealtime, please.  In theory they start eating less after a few weeks.. she didn't read that manual either, so we're still waiting.
Did you know that if you leave strings on the bale in a bale bag, and your pony manages to get the strings tangled around the netting, said pony can make a nice nose-shaped hole in the bag?  Yep.  I have no photo, because I discovered the strings at 6:40am when I needed to be on my way to work.  No more strings for her!  (Except I think I left them on today.  Eek!  Well, they'll come off this weekend.) 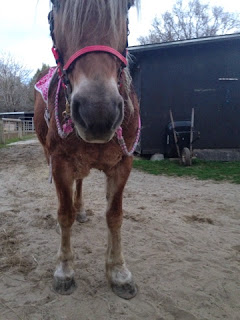 In bonus injury news, she appears to have a spider bite of some kind.  Note the weird pocket of fluid and such at her chest.  It does not appear to be bothering her, and I did find the wound, so I'm not stressing (yet).  It's always something.  One and a half week post-photo, it's still there, but rather less; still not worrying!
Posted by Figure at 9:05 PM 1 comment: